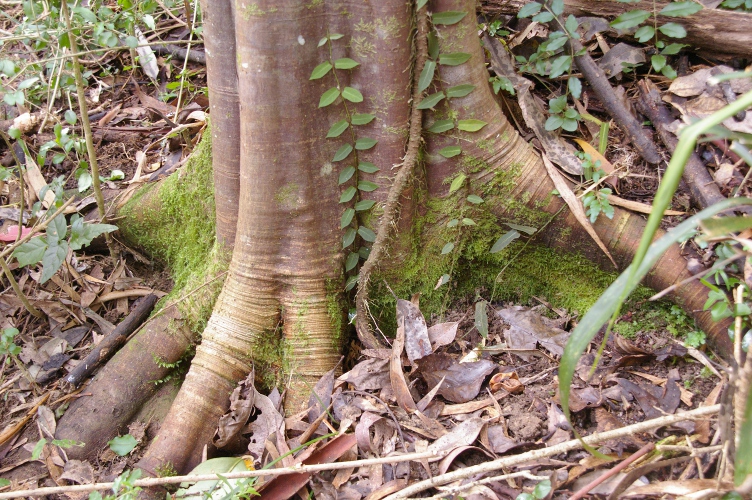 Just starting out, if you look closely you can see the adventitious roots as a little white mass below the top most 2 pairs of leaves on the left hand plant.

Oh, and the bigger vine between them is another older Parsonsia straminea.

The roots on that one are more visible in the next photo below.

The tree they are growing on is a Guioa semiglauca. 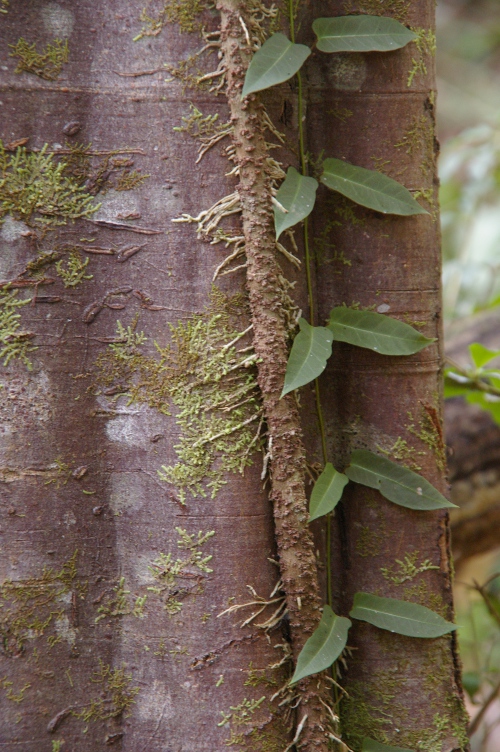 A better view of the roots.  All of the bumps on the vine can become roots if the situation is good, or it becomes adavantageous to have adventitious roots.

The juvenile leaves on the slender younger vine to the right will change to the more mature form in a year or two.  The bigger vine shown here already has mature foliage.


To set the scene, here is a short video of the small gully this vine is growing next to in fairly full flight, the day after a few days of rain.

Parsonsia straminea leaves.  This Parsonsia straminea is a little different in that it has yellowish green leaves underneath and quite a few leaves do have more than 9 or more pairs of lateral veins (not in these photos, mostly 8 here, but I went to collect some to help with the identification), but the stems and leaf shape are correct and the dead leaves look just right, see below and it has adventitious roots attaching it to the host tree. 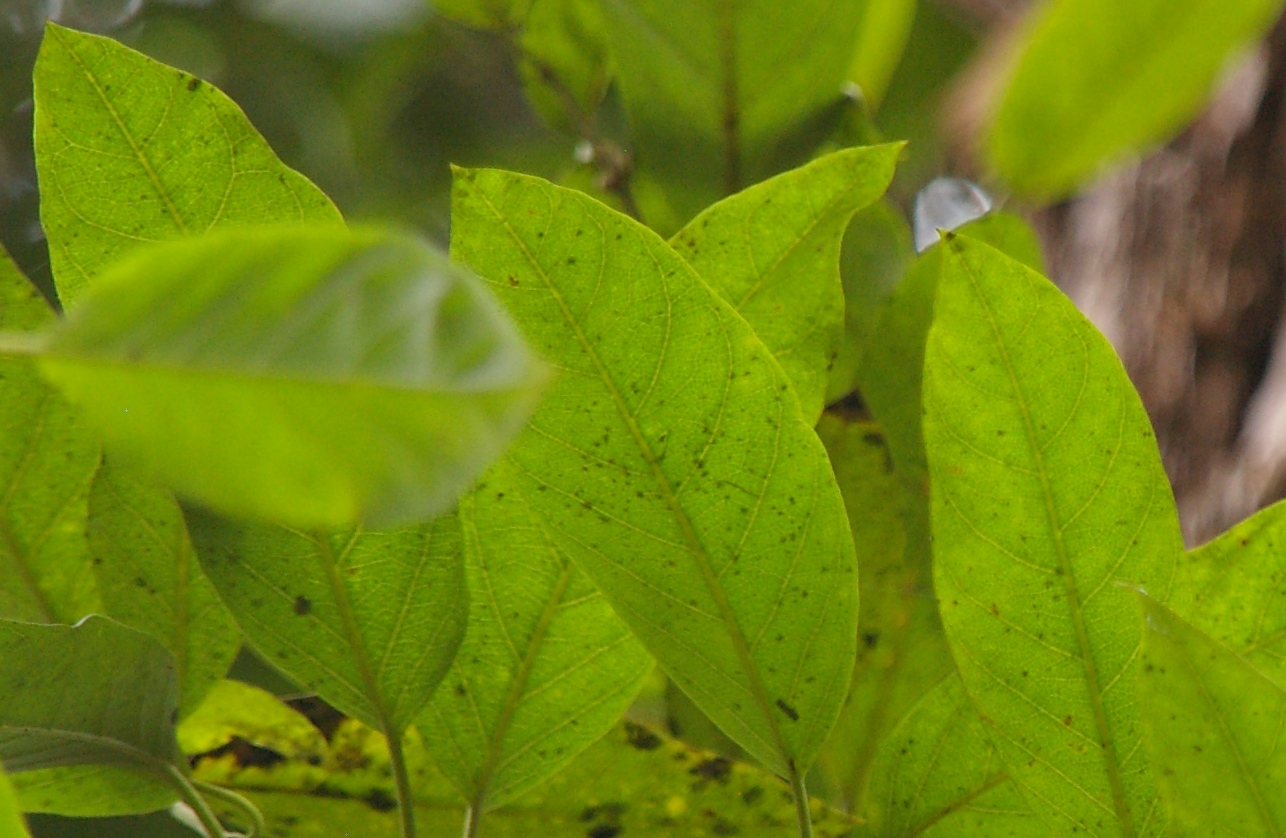 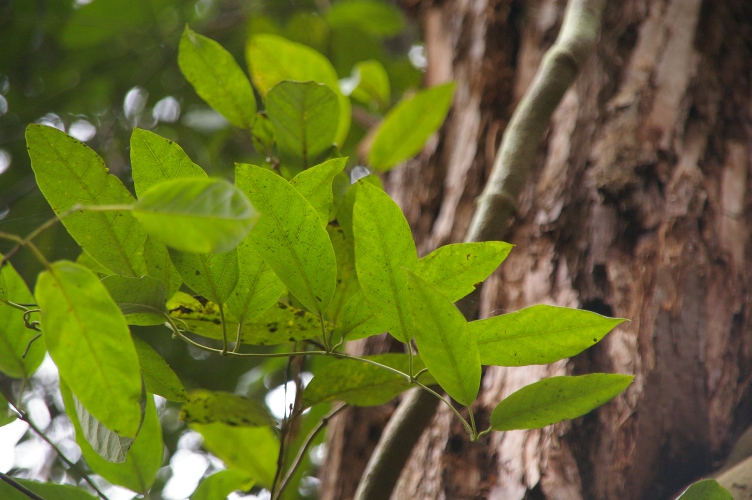 The way the leaves attach to the branches is quite distinctive too. 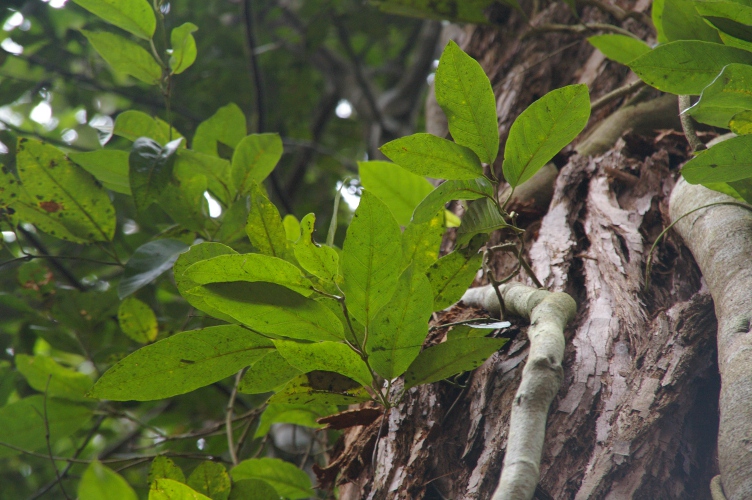 Another view of the petioles on Parsonisia straminea and the way they attach to the stems. 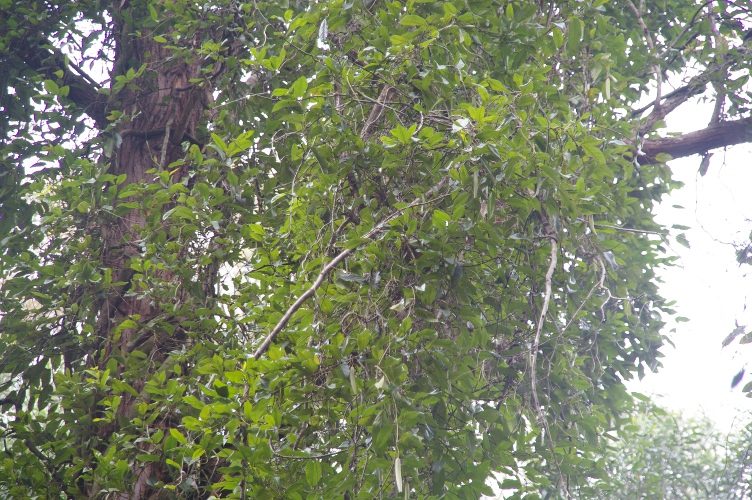 There are lots of leaves. Common Silkpods are quite vigorous.  Robust even. 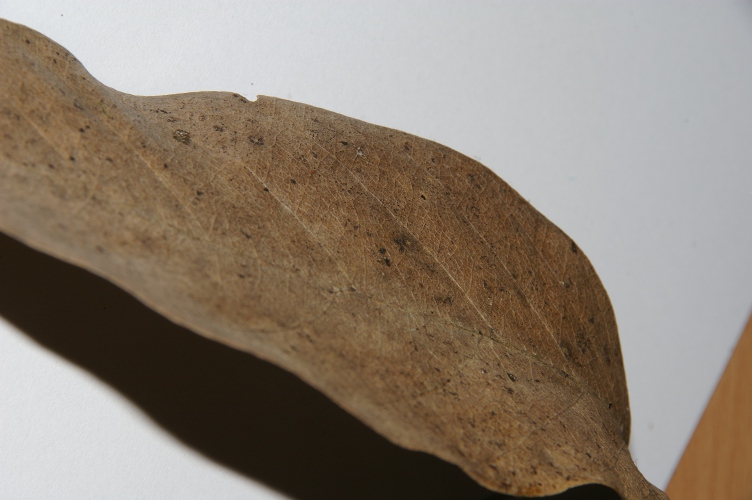 One of the features of a couple of the Parsonia species. inlcuding Parsonia straminea is that when the leaf dries out the fine veins are raised and quite visible on the upper side of the leaf. 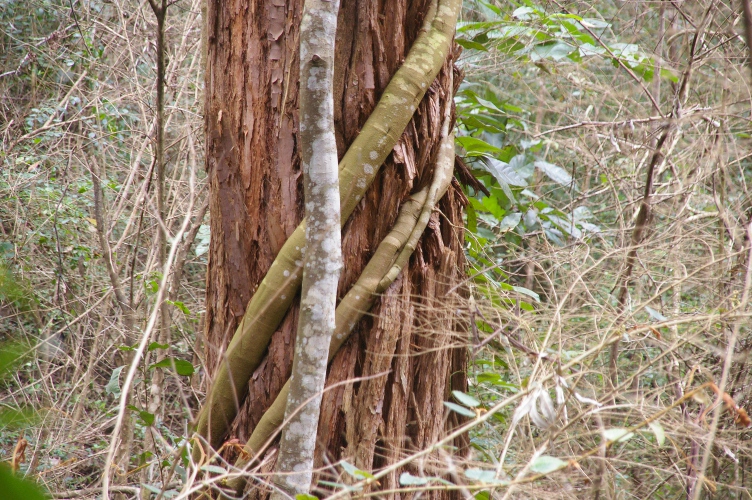 They are strong climbers, they normally start out growning straight up the trunk and then seem to just hang down from the tree as they detach after having found safe lodgings higher up the tree.

Pandorea pandorana does not have the  adventitious roots Parsonsia straminea does but still hangs in the air, it is a vigoruous twiner able bridge tall spaces in a single bound, well probably a couple.Eventually the lower branches it has twined around break, either old age or force of vine and the vine hangs.

To see why the this vine is looping around the tree look at the last picture at the bottoom of the page.

It is really starting to dig into the its' trellis, a Eucalyptus microcorys, the common name is Tallowood.  It's not a small tree.  This photo is taken from across the other side of the gully, looking at the first spiral around the trunk, it's about 4.5 metres above ground level, 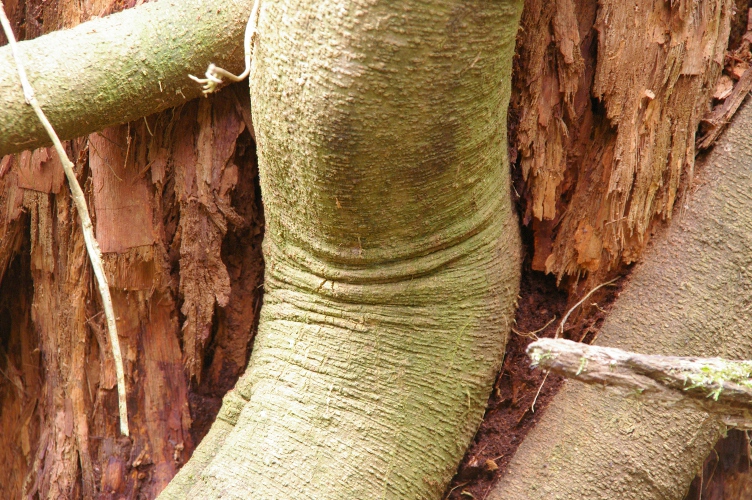 There is some evidence of adventitious roots here.  I know I have a better image somewhere showing roots growing to into a rotting trunk.  You can be quite certain there are roots growing into the bark layer. 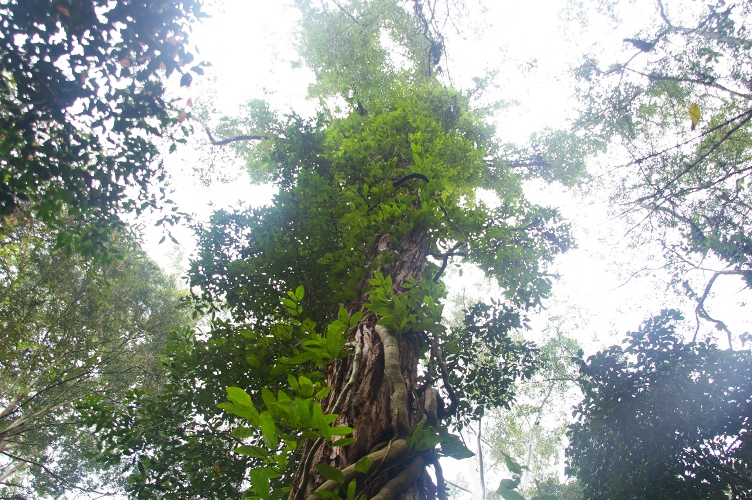 I think it will take quite some time for this vine to cause the Tallowood much damage even though there is a lot of vine hanging on this tree, Tallowoods are extremely stout.

The tree with the larger leaf to the right is a Quintinia sieberi, about 5 metres behind me to my right is a Dendrocnide excelsa sapling working its' way up.

It is another misty morning, the sky is white and bright, to the camera. 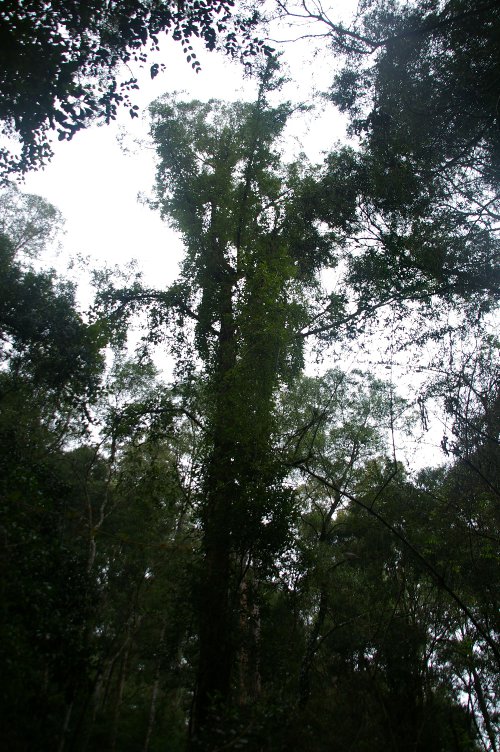 The Tallowood is quite a tall tree, with the over exposure you can clearly see the extent of the Common Silkpod.  The Eucalyptus microcorys does extend well out beyond the edge of the vine, look for the little bits of dark in the light background, that is the leaves from the tree.  (Use the keyboard buttons Crtl and + to zoom in, Ctrl - to zoom out or Ctrl 0 to reset your view to normal.)

I suspect this relationship will last quite some time, other softer trees may have succumbed to the stresses by now. 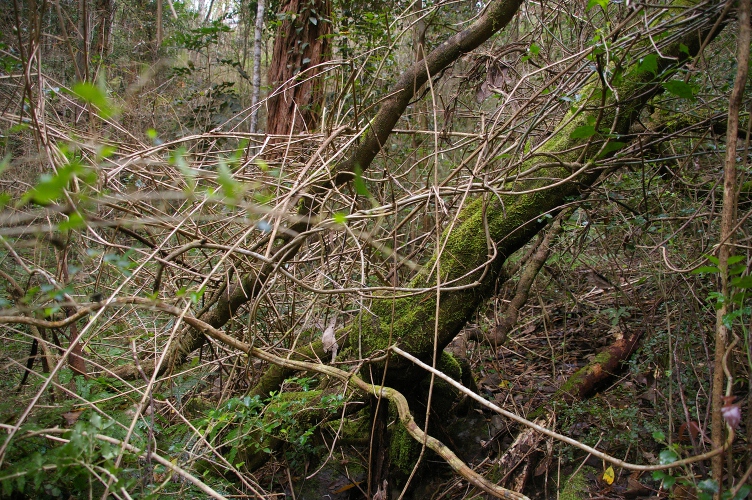 Vines can wander quite a distance before they find a suitable trellis, especially if their original host has fallen over.  That is what I believe happened here.

The Tallowood is about 15 metres away from the Parsonsia straminea roots which are here, the vine wanders over the ground via a circuitous route, up the hill a bit then down toward the gully then over to the tree.  There could be 25 metres or more of vine on the ground, but that is more trunk to strike root from.

The green leaved sapling to the left of the Eucalyptus microcorys is a Diploglottis australis.  The skinny trunk between the two fo them is a Guioa semiglauca.

The gully all this is happening next to is about a metre from the D. australis.  Water will run in this gully for days after a good rain event.  After a week or so it slows to a trickle then after a month it will dissapear into pools.

Have a look here at a short video to see this gully in fairly full flight, this is the day after a few days of rain.