With the exception of some saplings, very thin trees about 8 - 10 metres tall, we don't seem to have any younger Tallowwoods on Sassafras.  I think in most areas it is too shady for them to survive.  The thin saplings are having a very hard time, generally seeming to die without a clear line to the sky above. 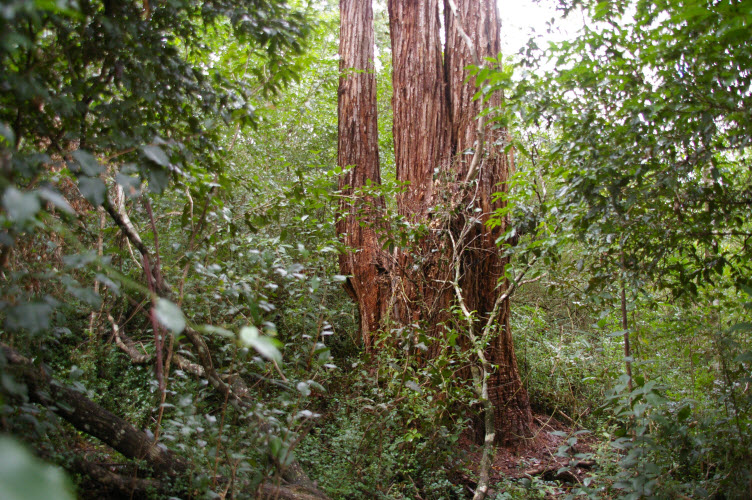 We like to joke that logging in years gone by has selected for multiple trunk Eucalyptus trees.

It is now about 30 years since Sassafras was last logged.

This Eucalyptus microcorys was probably saved because it was a triple trunker, each trunk was probably a bit too small then.

Despite the size this tree does not predate European settlement here, "its just regrowth".

Some people have a hard time accepting how fast some tree species can grow here. We had a survey done a while ago for Carbon Sequestration (which we didn't go ahead with, some ethical issues and too many trees).  I pointed to a Blue Gum and said I thought that when we moved here it was just a sapling, about as thick as a forearm.  There were some doubts expressed but I have since found a video taken in mid 2000, I'll extract some stills. 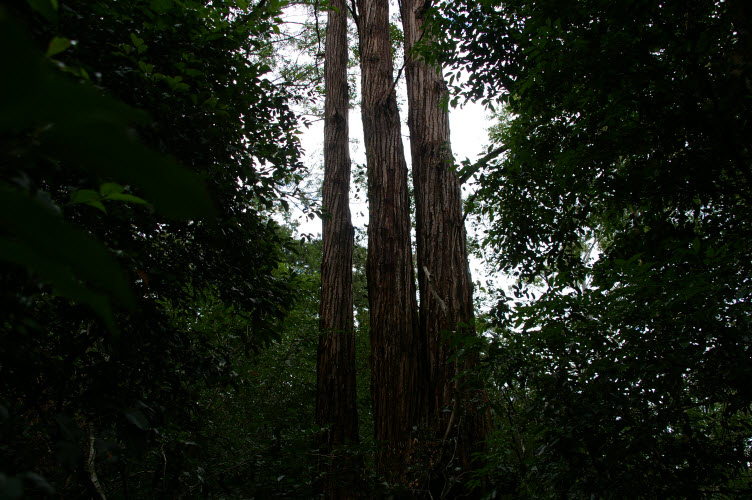 This photo of the same tree is taken from a little further back, peering between two Syzygium floribundum which seem to be sizeable trees themselves when you are standing under them.

Still not many branches down here.  Syzygium floribundum are normally a stream side tree, oh and there are Ficus coronata reapearing in quite a few places further up and along the slope, where there is soil visible rather than just gravel.  They are also known as Creek Sandpaper Fig.  It rains a bit here.

This location is quite some way above our internal creek, in the photo below you can see part of a grove 20+ metre tall Tristaniopsis laurina, bottom right with a Acacia to the right of it.  The grove is about 20 metres from the creek and about 4 metres above it 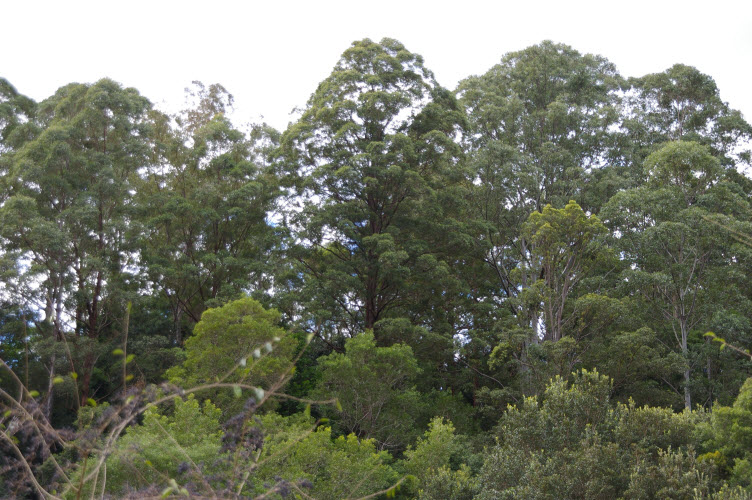 It is a big hard to appreciate the size of this tree so I took a photo a little further away.  It is around 42 metres tall, measured with a Silva Clino Master.

The Eucalyptus microcorys is the one in the middle of the photo, with the classic shape of an emergent Tallowwood crown.  Though you may actually be seeing the very top of a double trunked specimen which is very nearly behind it, slightly upslope, skinnier but slightly taller, measured more accurately at 46 metres.

The Syzygium floribum in the photo above show up as the darker green foliage down to the left of the of the trunk.  Between two Acacias, with the brighter green foliage.

To the right of the Tallowwod is a fair size Eucalpytus saligna.

If you look carefully in the E. saligna, just below some bright green leaves, you will see a dark object.  This is the top of another E. microcorys that has been eaten by termites at the base and fallen into the E. saligna, it is "hung up", it was quite large but also had a second trunk which is now growing fast. 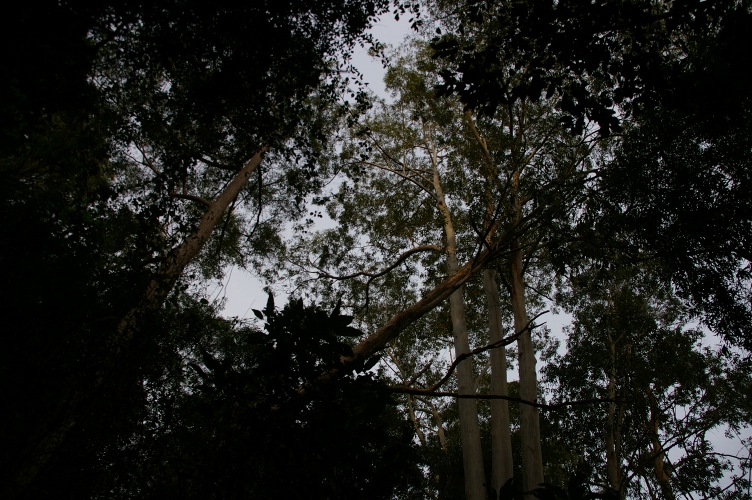 The remaining E. microcorys trunk is the one on the left that looks as if it too is leaning to the right, it's actually bolt upright, a bit of parallax effect at work.  The four larger living trunks are all quite vertical and quite tall, the E. saligna triple trunker would be over 40 metres tall.

This collapse has also let more light into the regenerating rainforest community below it, a big plus.

Some of the plants benefiting include a few Alphitonia excelsa, an Argyrodendron actinophyllum subsp. actinophyllum, a couple of the closer Endiandra muelleri, many Ficus coronata, along with a Gmelina leichardtii, the smaller spcecimens of Melicope micrococca, a Toona ciliata, a couple of Syzygium australis and others are all growing away much faster now on that ridge edge with much less shade over head. 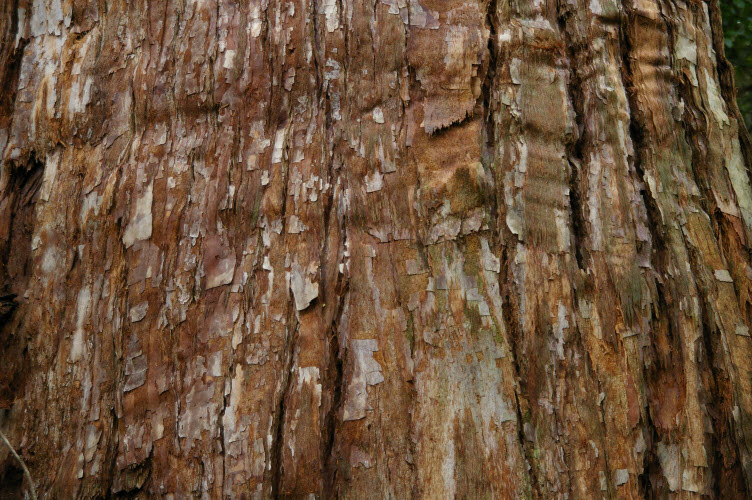 As they age the outer edge of the bark gets a very thin scaley layer, it doesn't look just fibrous any more.  This particular specimen, with a single trunk, would be one of two that I strongly suspect are actually old growth, it is just slightly mishapen, enough to prevent it being cut down.  This Eucalyptus mircrocorys is quite a large tree, it stands out among all its' neighbours.

At the base of this tree there is a Brush Turkey mound, the next one is about 100 to 150 metres away, just next to the base of a really large Eucalyptus saligna, just up hill from the triple trunker above. 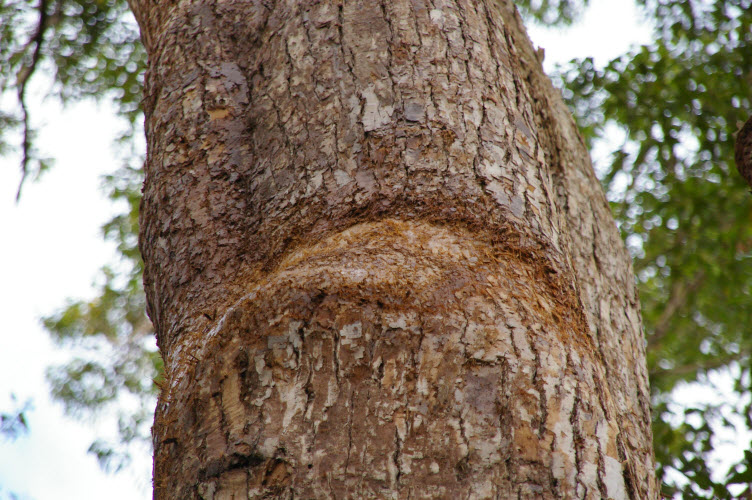 The same tree a bit higher up, quite a bit actually. I've no idea who has done this, this would be convenient less vertical place to rest.  Perhaps it was the Brush Turkeys, I sometimes see them up in the canopy keeping an eye on me, or maybe it was a Glider of some sort.  There are no nearby branches that could have rubbed against the trunk up here.

Most of our really large trees (not just tall) are Tallowwoods along with some Blue Gums.  I expect this mix will change as the Rosewoods, Sassafras, Pepperberrys and many others, continue to grow over the next few centuries or so.

That said,I know we had some quite large Blue Gums in the sky, we have one that was ring barked, with the classic nobbly bits of growth up the trunk, that is still standing, much taller than anything else near it.

Likewise there is another, something else, ringbarked, that towers straight up, then turns at about 45 degrees and keeps on going, once it is above the existing canopy of Tallowwood and Blue Gum.  I guess it was trying to get around something else. There are some quite large holes in the ground that used to have trees in them, and semi cirular terraces on the hill sides, more on that later.