Not yet, plenty about, they tend to coppice if chewed or burnt.

Mishocarpus australis tend to grow in the damper places, not necessarily near water, though this is only a metre from a gully that runs for a day or so after rain, other trees tend to be in gullys or a long way down slopes that have more run off.

The Red Pear-Fruit took me quite some time to identify, years, because I made those nasty things, assumptions.

I assumed each time over the years that I was looking at leaves.  Actually they are compound leaves, in a pinnate form.  Like a Dysoxyllum fraserianum or Dysoxyllum rufum.

The compound leaves on this tree are usually made up of 4 leaflets, occaisionally 5.  A compound leaf behaves like one big leaf, it unfolds with 4 leaflets, when it falls off it takes all 4 leaflets, still attached to the rachis that connects them, normally never just one of them falls off by itself.

So how did I pick it? 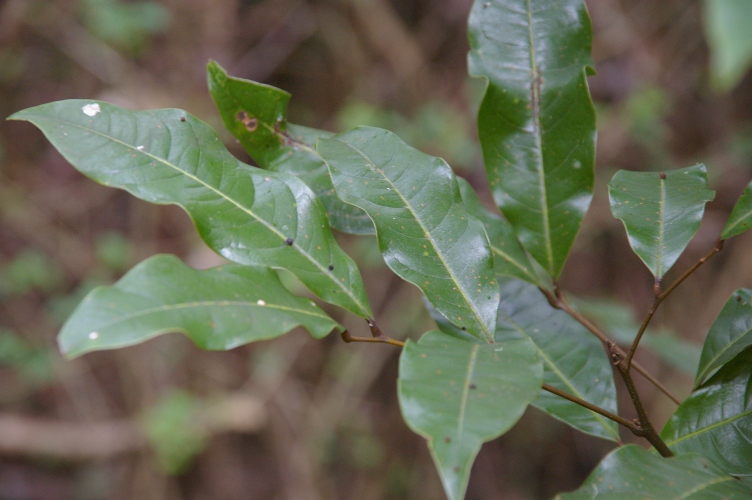 I was looking yet again through the books trying to key it out then all of a sudden I realised there is no shoot in the leaf axil, where the leaf stem attaches to the branch.  A true oh b####r moment.  Once I twigged to the truth it took less than a minute to identify.

The shoot on the rachis axil in this photo is down in the bottom right corner, where the lower rachis diverges from the branch.  If you look carefuly or enlarge the image you will see a little swelling where the rachis joins onto the branch, just below the shoot. 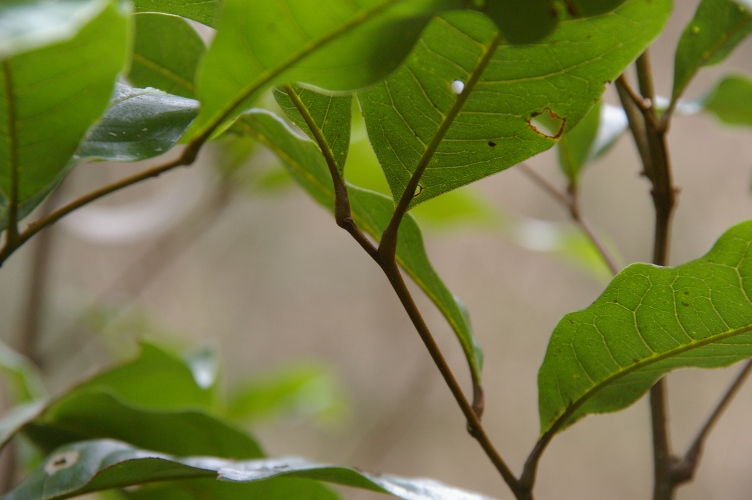 Mischocarpus australis have quite distinctive leaflet veins and most of the leaves have quite wavey edges, so they might have a sinuate margin rather than an undulate margin, it's a matter of degree it seems.

Oh look at that, there's another rachis join to a branch at the bottom right.

Sorry to harp on but this took me years, probably only 2 failed attempts but over a long time. 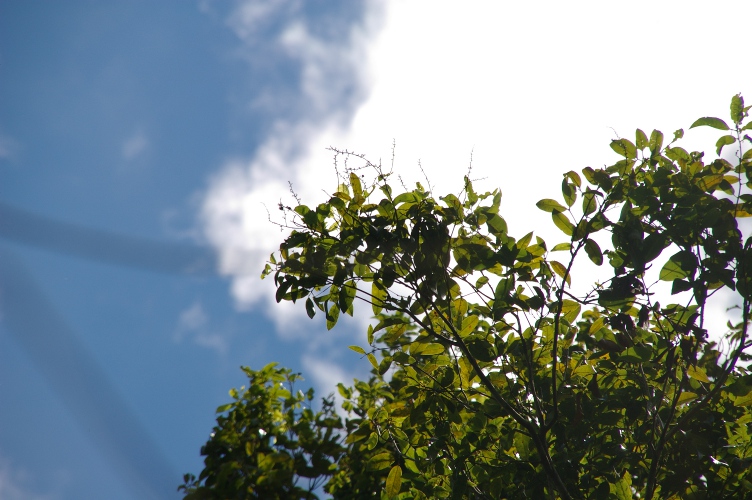 It was when I saw the little flowers way up on this tree  late last year, 2011, that I started getting keen on identifying it.  I had seen them in flower a few weeks or a month before but took a while to get back with a camera, no flowers left but I think there is one old fruit still there.

The reason for this photo is I was not certain the flowers had actually come from the tree.  I wondered if they were from a Ripongonum discolor that grows up the tree. I had only seen them in passing and there was no way I could be certain without a telephoto lens.

I was now more intrigued and did evetually identify it, after a decade.

I had uncovered this tree from layers of privett, large and small leaf.  It was a large sapling then, probably in late 2001 or early 2002.  It is now quite a decent tree, quite cyclindrical in shape, perhaps 20 metres tall now.  This Red Pear-Fruit is about 25 metres from the bottom of our largest gully. 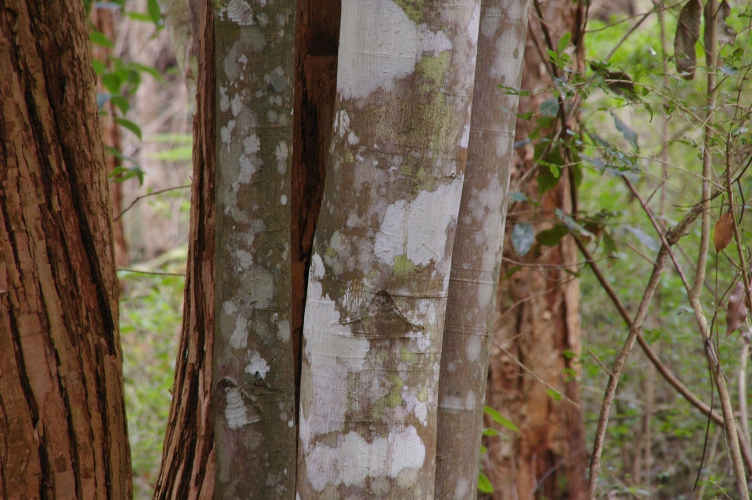 This is not the trunk of the tree above, this one is about 1 or 2 metres from a gully bottom.   It has also coppiced from the base some time ago.

Notice the distinctive horizontal raised rings, they seem to dissapear as the trunk ages.  Also very visible are branch scars, on the trunk nearsest, the sombrero shape.

This Mischocarpus australis is growing through a Eucalyptus microcorys of a decent size, it is catching up, up to a about 3/4 of the height now.

I believe the Tallowood will win because Red Pear-Fruits simply don't grow as tall as Tallowoods not that it might bother the Red Pear-Fruit, it has been growing quite happily under it for quite a while. 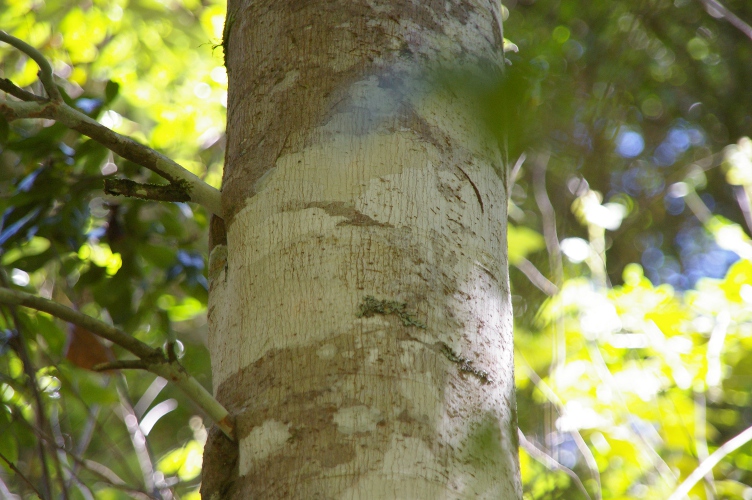 This is the older tree, with the spent flowers, notice the raised rings have almost dissapeared.

Also visible is where those branch scars come from, when those little branches fall off, that is where the scars will be.

One thing I did notice in researching this species is the recorded heights, all the online references list it as a tree to 7 metres which is a fairly gross under estimate in my experience at Sassafras.  Alex Floyd gives a more realistic 25 metres which I agree with though I might be able to give that a challenge one day, this one seems to growing quite well. 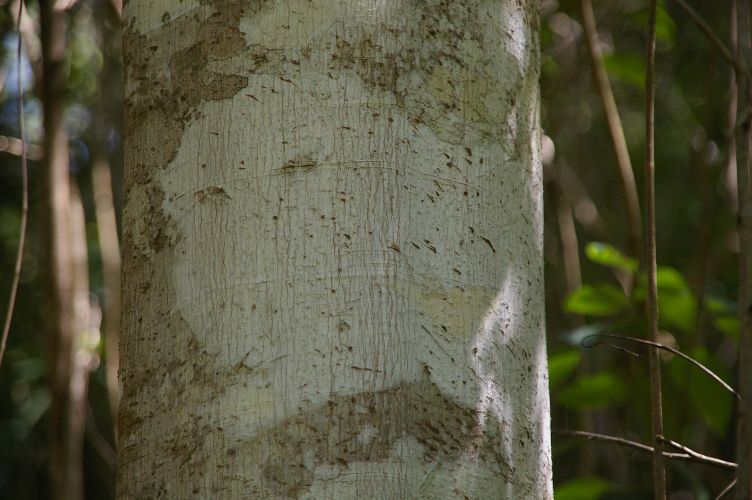 A little lower down the trunk, the rings are still there, just.

Someone has been climbing up this tree, it looks like they have 3 climbing claws or maybe they climb with 2 at the front and one at the rear or vice a versa?