This would have been from one of my earlier fruit collections from our old growth Waterhousea floribunda at the back of the block.

This little seedling has struggled through the 2 years of drought we had until December 2003, I was looking for a Black Apple seedling on the other side of the creek crossing we used to use.  This little one is maybe a metre from the edge of the water.  The creek here was bone dry for quite some time.  I didn't find the Black Apple but noticed the difference in the privett seedlings.  It will get a cage and some food to help it along.

These seedlings are popular wallaby food.  This photo was taken in the middle of winter here, 28 July 2007. 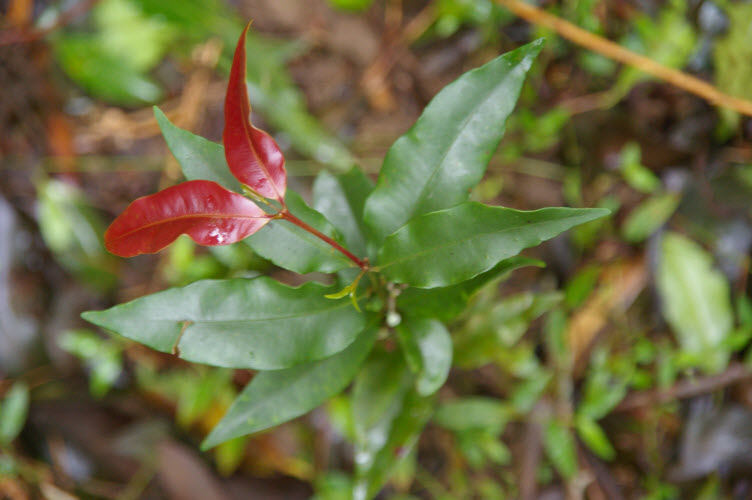 This photo of the same plant was taken on 14 July 2009, a much milder July, very little frost.  Indeed Sydney has had its' warmest August ever.  I digress, but you might guess where I was headed.

This little one is about 20cm high. 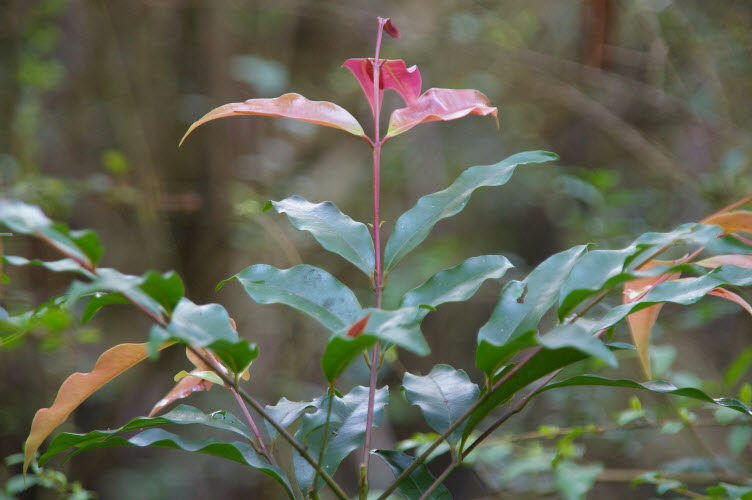 This little tree is about  a metre away from our internal creek, on decomposing volcanic scree.

It was also in my original bunch of seedlings I propagated.  It sat there as a little seedling for a number of years until I cleared the small leaf privett on the slope above it.  This was actually to help a lot of other seedlings higher up.  In a year and a half it has grown from maybe 15cm to about a metre tall, the cage has just come off it, no chewing so far so it is proabably safe.  But no, nibbled again, vigourously, the cage went on for another year.  It is free now.

Notice the distinctly wavy edge on the leaves, also a characteristic on tree matures. 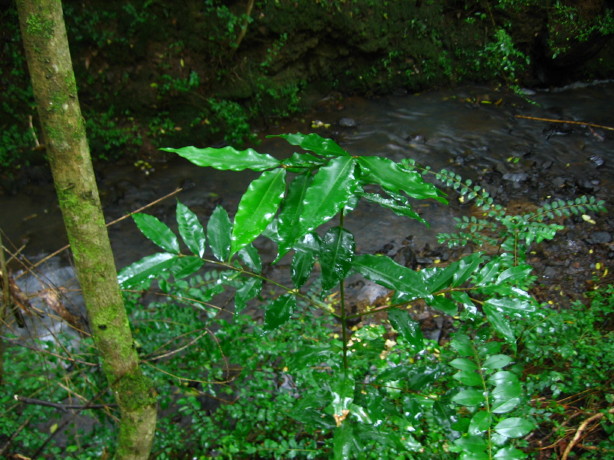 Waterhousea floribunda tend to be found near water, but it does not have to flowing as it is here.  There are a number on Sassafras that are on damp locations or on the edge of normally dry gullies.  The more water the bigger they tend to be though.

This particular plant is one of number of transplants from underneath our old growth Waterhousea floribunda we have planted on the lower reaches of our internal creek.

We have no naturally occurring stream side Waterhousea floribunda on the lower reaches of our internal creek after it flows through a dam on a neighboring property.  The vast bulk of any fruit swept downstream will be on the bottom of that dam.  There are quite reasonable numbers upstream of the dam.

Waterhousea floribunda seem to be moderately frost resistant in more open locations, a very heavy frost (probably a lot lower than than minus 6 or 7 celcius, perhaps minus 10) will set them back but they will recover.  Under cover of Privet and near water they are fairly immune to frost damage.

You can also see the omnipresent small leaf privet found in many parts of Sassafras.

I'd better get some photos.

These leaves were conveniently near head hight due a dead Acacia melanoxylon breaking off a few branches on its' way down.

This is one of two trees on a soak near the top of a ridge, growing beneath this Eucalyptus microcorys.

I believe they would be of a similar age to trees shown immediatley below, that is they are regrowth.

These 2 are part of a colony up a damp gulley that flows for a few days after rain though it flows most of the year now, since about 2008.

Waterhousea floribunda in all but the drier hillsides support epiphytes on Sassafras.  The more mature tree on the right is festooned part of the way up with Birdsnest ferns, giving way to Elk Horn ferns higher up.  Doubtless there are other species.

It is an ideal climate for epiphytes, plenty of dew most mornings, dripping out of the trees, misty on others and then there is the rain.  Generally cool.  Quite a different world to out on the pastures.  It can stay damp in here for many weeks after the pastures are bit worse for wear.

The ground might be dry but not the trees or the mosses. 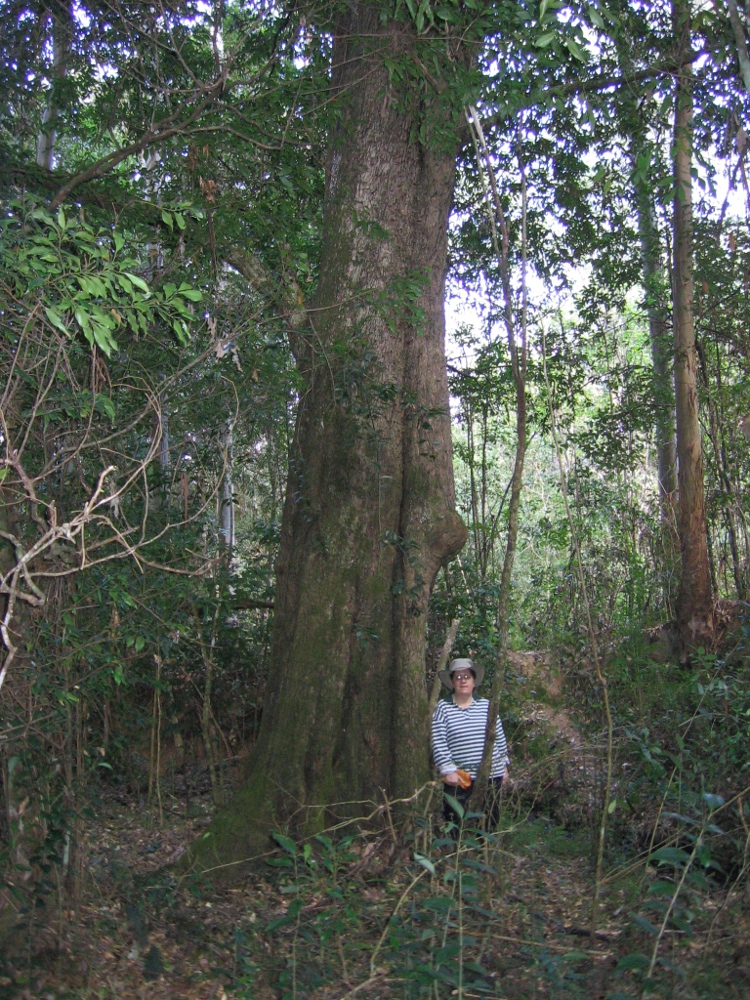 This tree has been around for some time, I'd have to describe it as old growth Waterhousea floribunda.

At 1.5 metres above ground, just slightly below the top of Lindsays hat,  it measured 128 cm in diameter in 2003.  The largest generally accepted size for Waterhousea floribunda is 75 cm.

This Waterhousea is on a bend in our internal creek which can be seen as a dark band of rocks and water behind the tree, soil is not overly wonderful but then it gets flooded regularly with silt from the valleys that feed the creek.

Historically In most years the creek might stop for few weeks in middle to late spring through to mid December, however since about 2005 it has not stopped.  Our larger first order streams are also flowing for a lot longer now. 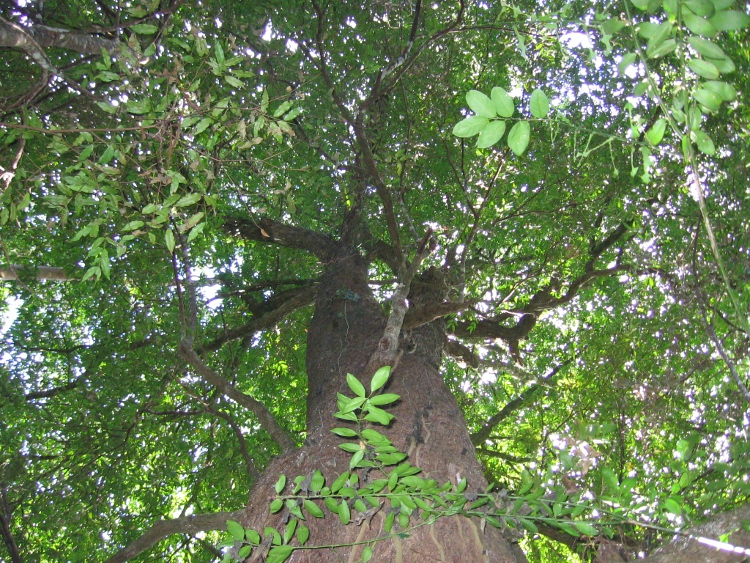 The same tree looking up the trunk from the other side.  Unfortunately a very very heavy frost last Winter (2006) has zapped the Piper hederaceum var. hederaceum growing up the south side of the trunk, it is now coming back though, the leaves are showing up as green smudge higher up the trunk, the dead vines you can see as brown wiggles at the bottom of the photo.

This photo starts just above where the first branch leaves the right hand side of the trunk in the previous photo.  If you look carefully you also get the idea this is also a rather tall tree.

Now I have the technology I will have to measure it but for now I guess around 30 or 35 metres.  Around the hight of its' sibling just up stream.

The sibling, slightly smaller, 113cm in diameter, may or may not be taller.

This one has numerous epiphytic residents living on the upper branches, well up beyond where this photo finishes, seemingly quite exposed.  I can only guess they survive because of the heavy dew most mornings, plenty of cool air rolling off the valleys above.

It is this tree that really gives me the impression of what the Standing Brush that was Mooral Creek was like.  Where the middle storey was.  We know we used to have big trees, this is just a middling sized one.  Other species would have easily grown another 15 to 20 metres taller.  Some of the Moreton Bay Figs in Wingham Brush still give some idea of the scale even after having lost lots of limbs in the past few years.  On the short walk at Dingo Tops forest park near the picnic area there are excellent examples of Black Booyong and many other trees we have as regrowth or seedlings here, or at Ellenborough Falls, where there are large Rosewoods on the path to the bottom of the falls.  In Coorabakh National Park there are excellent examples of Yellow Carrabeen at one of the picnic and boardwalk areas.

We have a couple of big dead stags on Sassafras as well, again helping give some impression of the scale of what used to be here.  We also have some significant holes on hill sides where Red Cedar was probably dragged out in the 1880s or 90s.  There are also depressions but these are probably just the collapse after large trees have died or been burnt out by lightning or by fires after clearing.

This tree also has clear signs of the remnants of another quite large trunk to its' left as we are looking at it.  I'm guessing the  trunk died a very long time ago.

Try as I might I could not get all of the crown of this tree in one image.

I'll measure the height of this tree as well.  This will be another example of why using a laser based tool is not going to be accurate, the highest point is some way off vertical.  In most other locations on Sassafras using laser based measurements will fail because the vegetation is too thick, no clear line of sight.  The Sunto device I use allows me to estimate where the top actually is by using both eyes, one looking up the sight and the other peering at the tree, superimposing the horizontal line onto it.  I'll be moving this bit of text to a page on measurement when I get one of those roundtuits.


Just upstream from these trees is a property that used to known as
Stones Brush, mostly pasture now, our internal creek drains most of it, including the two volcanic plugs.

There are some Port Jackson Figs on rocks near the spires, a rather windswept place.