By 1930 Europeans had been living permanently in Mooral Creek for 27 years.  Farming was a well established enterprise, in the 1930s Mooral Creek was one of the most productive localities in New South Wales, we had deep fertile soils then.  In some places we still do.

Our best guess regarding the photo below is around 1930, perhaps as early as 1928.  The two houses still exist, in the middle foreground is Glenola, to the right up the hill is Tobermory.  The Mooral Creek School building is still there too, it's a home now, it's behind the tree about half way between Glenola and Tobermory, the tennis court next to it is under a shed now.  The veranhdah on Tobermory faces very close to due North, if you were to trace a line from the middle of Tobermory through Glenola to a point just above the timber structure in the bottom left, that would be North.  My best guess is that this was taken around 3 or 4 o'clock in the afternoon possibly in mid Autumn, if the pasture was a little frost sensitive as the current ones are it would still appear brown (white) on top in early spring, but then again maybe the pastures of the day weren't frost sensitive. 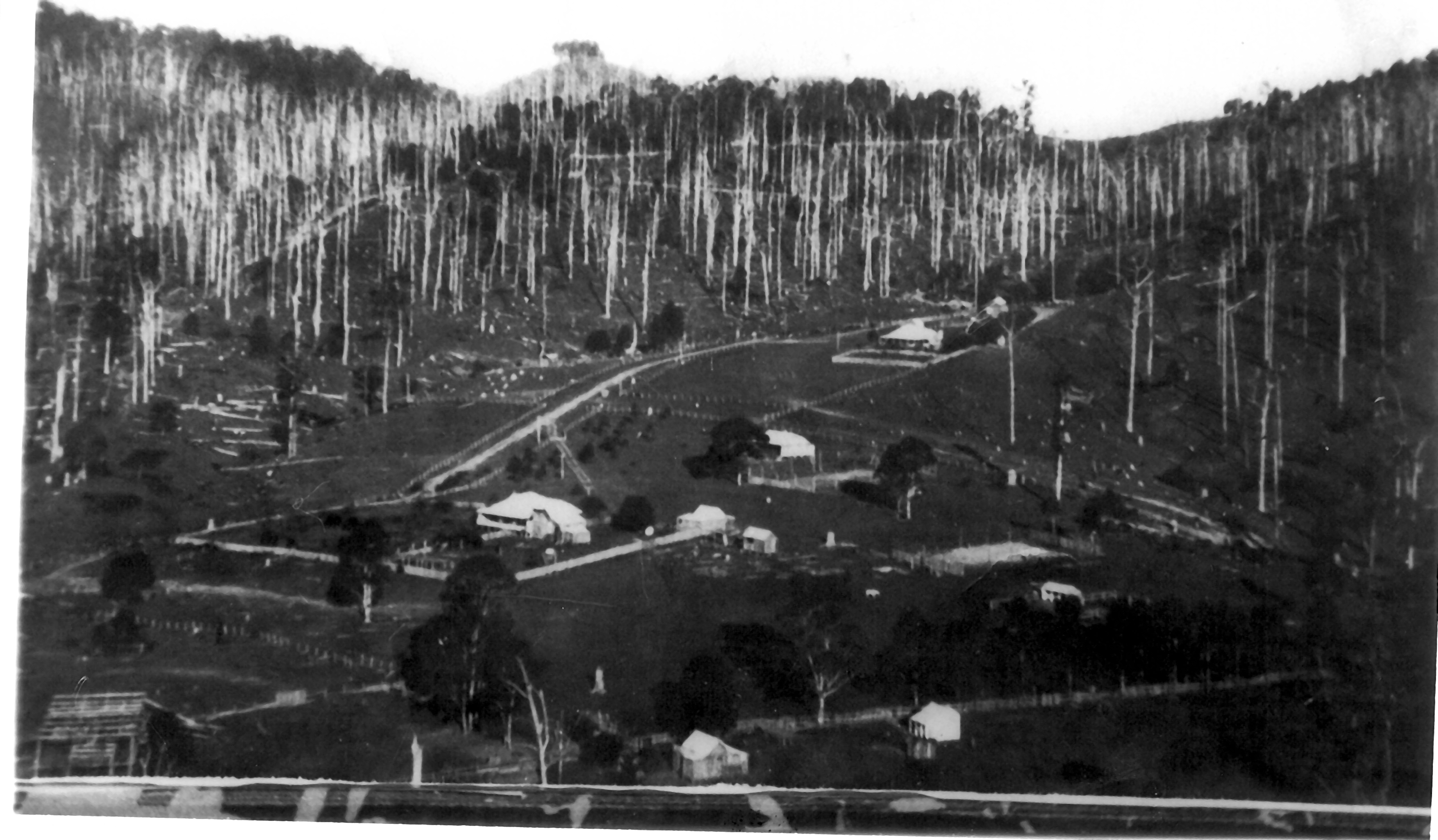 Glenola was the home built by the first European to live in Mooral Creek, Henry Ford, the house you see here is the result of a few additions.  I'm told the big tree he lived in at first used to be on the creek flats that are behind the fence rail at the bottom of the photo.  He was also the second owner of our place.  We suspect the original Europpean owner, Thomas Skinner, took up these portions from the Crown for the timber, he owned them for over 10 years before selling to Henry Ford.

The original Bridal Track into Mooral Creek came straight down the hill from the saddle above Tobermory, the top of the Gooseneck. The Bullock Teams taking trees out went up the hill on the track leading South, the one that seems to come from nowhere inside the trees, with their heavy load of logs, in the early days more likely just one log, or part of one, if the pictures in the Wingham Museum are anything to go by.

What you see on the creek flat is the result of almost 30 years of conscientious clearing by ring barking, burning and felling for timber, for use locally or for sale.  The hill side is a work in progress .  Bear in mind that most of the remaining old growth trees you see here are on the poorer hill side soils.    The early settlers used to call it the Standing Brush, very dense.  What you see is the remaining cover storey, with some middle storey, the understorey is almost completely gone.  The 4 to 10 metre bushy trees you can see are almost certainly not understory dwellers, they are unlikely to cope with the level of light they are in.

If you haven't already done so you use the Ctrl and + buttons on your keyboard to zoom in on this page, using Ctrl - zooms out 1 level, Ctrl 0 resets the view to your normal settings.  Pick the level of zoom that works best for you.  Just remember this was a tiny original print, perhaps 75 mm by 100mm.

There a some live trees to the right of Tobermory where you can make out the actual crown size. The stump of the tree with its' crown second to the right of Tobermory is still there, the one where the trunk appears to be leaning to the right. At ground level, with the cambium layer well and truly rotted off, it is consistently 2.1 metres in diameter. Most of the white trunks you see on the hill side immediately behind the homes are actually still alive if you look closely.  A very high percentage still have crowns.  There are also some well cleared laneways where there are few if any stumps or logs left. This kind of matches the way I clear privett, do the gross clearing to find what you want then clean up areas properly over time.

The method of clearing large areas sometimes went like this, go in with an axe and ring bark all trees you didn't want.  Once the cover and middle storey was dead the light could get in, things could start to dry out.  Then you would burn, as often as needed.  With no leaf cover the frost also gets in, that takes care of lots of species.  Sending in the pigs also helped grub out the smaller plants.  The stumps were grubbed out by burning usually. There were of course quite a number of species that were of use, that you wouldn't kill right away.   For example, you would leave White Beech, good for cabinet making, Turpentine, for posts and piers, Rosewood for its' fragrant timber, Tallowood, good for a really hard wood and maybe Break Axe too.  I would add that most of the trees in this photo would have been harvested for timber over time, unlike other locations in Mooral Creek.  In other areas the former description would have applied, the timber fallers went in first and cut what they wanted and the rest, some got used for homes, sheds, or bridges or for post and rail fencing but a lot got burned off.

Our Mooral Creek Hall has floor boards of Tallowood, one inch thick and two wide, it was built as a dance hall.  The Hall doesn't appear for another 20 or more years, it was built on land donated by Henry Ford, from most of the larger square paddock on the other side of the road above Glenola.  The Hall is over the road from what will become Warrawillah road in later decades, in the photo it is just a fenced off laneway.

Tallowood is also good for strainer post and post and rail fences, there might have been some smaller Red Cedar left behind by the Cedar Getters who came to Mooral Creek in the late 1880s and 1890s, there were other useful species but out of the many 10s of cover and middle storey tree species most weren't considered good for much, then.

In my opinion it was the frost and the fires of the past century that have helped select for the current preponderance of Eucalptus and Acacia and to a lesser extent Corymbia if the explosion of other seedlings on Sassafras is anything to go by, indeed Eucalypts are noteable by their complete abscence as succesful seedlings in the shady parts.  Corymbia intermedia (Bloodwood) does occaisionally appear and grow in modest shade, being able to grow through established Acacia maidenii and A. melanoxylon saplings so long as there is a little light on one side.  Eucalpyptus saligna dies in the same light conditions if it is out paced, it seems to need that big hole in the canopy above it or, more often in my experience, open grassland.

How much good timber was there left by this time?  We know Glenola had two timber mills just off our place (they also owned our Portion), both just over the line of our southern boundary, one down on the creek flats (about 250 metres from where Mooral Creek road leaves the bottom left of the photo, though it is little more than a cart track beyond Glenola) and one out the back, about 850 metres ENE from Glenola near the track out to what known as Stones Brush.  That track was in use up to about 10 years ago to drove cattle in and out of Stones Brush, the Cattle Yards are still there.  Stones Brush was the heavily forested valley at the head of our internal creek, with a volcanic spire on the Southern portion.  We do know that by 1926 most of the good White Beech had gone on the Fords property.

If you stand on the road coming down the "goose neck" into Mooral Creek and look to forrested hills around Mooral Ceek you can still see many of these dead Stags, if you blow up the image on my home page you can just make them out as vertical lines on the hill sides, many of these are dead trees, some are live trees with nothing hiding their trunks.

We have a couple of stags on Sassafras, they would have been stupendous trees, we are only seeing the parts that are still standing after a century.  They just got in the way back then.  I will get some of the base close up and some the of surrounding re growth Eucalyptus and then some distance away so you do get an appreciation of how big they would have been, words are only so good.