I was having a chat with a bloke from a nearby nursery at a Wingham Farm Field Day about how scarce gum trees of various species would have been in the Rainforests around the Manning before Europeans took possession of the valley.

That was the first time I heard the term fire sticks put to gum trees, I'd have to agree, on both his points.  Firstly once the Gums become more common fires tend to be far more prevalent, probably for a couple of reasons, most Gum tree seedlings only pop up when there is a reasonable amount of light, so do a lot of other short lived species. Most of them tend not have dense canopies, often no more than 70% shade,  they let more evaporation happen, Wattles though are generally much shadier than Gum trees and they also tend to burn more easily, in the case of Gum trees ( Eucalyptus and Corymbia), highly combustible, though most Gums recover quite well from fire.  Most Wattles (Acacia) will die but germinate readily after fire (having seeds with a much longer viability, over a decade on Sassafras) and most species are reasonably frost resistant, as are the Gums.

In the past decade I have found 4 Corymbia intermedia seedlings, they have appeared in areas with no more than 50% shade, in all cases on the edge of any forest, with one side open to the sky, or under one other tree, again with access to sky.  Of course I have found many tens, probably hundreds, of wattle seedlings, they are able to come up through privett if the privett is only a couple of metres tall with no more than 60 - 70% shade.  In the dozen or so instances where I have found Eucalyptus saligna seedlings they have, with three exceptions, been in  full sun for quite a few hours a day once they got above any surrounding grass.  In the case of the exceptions, they appear to have germinated about the same time as Acacia regrowth and out grew them, which they do easily. When they germinated it was more than likely quite sunny.  If they get too shaded during the seedling or sapling phase up to about 2 metres they die.  I've only ever found 2 Eucalyptus microrcorys seedlings, both died from shade, or maybe excessive waterlogging (water table on the hill side at about 1 centimetre for weeks) but unless they don't cope with water like mature trees do I find that hard to believe.  Our Eucalyptus saplings appear to be susceptible to shade even at the 5 - 10 metre size.

By contrast we have hundreds of rainforest tree species seedlings appearing in extremely shady locations. Most do not come up or thrive in open locations, in most instances they need protection from either excessive sun or frost to do well.  Of course they usually grow faster with bit more sun, just not full sun. On the other hand we have many hundreds of Eucalyptus saligna trees, many quite substantial, many tens of very large E. microcorys, plenty of very tall smaller specimens.  Corymbia is not as prevalent here.  in the damper locations s we have quite a number of majestic cover storey Acacia melanoxylon (Blackwood, a wattle, as distinct from Black Wattle which is not an Acacia at all), the A. irrorata are quite tall just less prevalent and skinnier, more prone to borers and leaf eating beetles, it's a tough life being a Green Wattle.

In my own personal experience at Sassafras around 70% or more of our Rainforest species are killed or die back exposed to frost when the vegetation disappears, they also mostly tend to die completely as a result of fire.  Two of the exceptions seem to be Sassafras and the Syzygiums which coppice, any existing trunks will die. So, the fire sticks take a hold for a while, how long depends on a few things, more on that shortly.

His other point was that the fire sticks are at least a readily renewable resource.  Given that a least around our frosty area it is hard to put the local more commercially valuable rainforest timber species back, and Gums also mostly grow faster than the Rainforest species, one of the exceptions is Red Cedar.  Without tree cover though Red Cedar is invariably attacked by the Cedar Tip Moth very quickly and becomes a little bushy, and we are too impatient to wait for a primary trunk to re-establish itself over the coming centuries.

While we are on the subject of Human induced ecological change, which this is, the current wave of change, over the past 200 years in Australia, is not the first one.  So far it appears that pretty much everywhere our species went after we successfully wandered out of Africa we have made changes.  In their  recent book, The Bone Readers, Tuniz, Gillespie and Jones make the point, among others, that in Australia research tends to indicate that the megafauna most probably died out within the first thousand years of occupation.  In much the same way as extinctions happened in other places we went around the Earth.  The causes were most likely habitat change by burning and the occaisional hunting of juveniles.  Some of the habitat changes have stayed through the 45 to 50 millenia since they were made.

One interesting example is what we call the Nullabor (Latin for "no trees"), wasn't always that way.  It appears to have been rather like a mallee scrub, low trees, interspersed with open plains, the open plains had similar vegetation as the Nullabor does today, it was dry, the same rainfall regime as today.  There are other examples given in wetter climates around Australia.

However the current lot of changes are far more catastrophic for the original inhabitants than those wrought by the first people to live here.

So how long is while?

I believe that most of the cover storey trees (those growing to more than 35 metres is my yardstick) and many of the middle storey (10-35) had the potential to live for a reasonable length of time.  There have been some major fire and drought events over the past few centuries, if they survived those and they were in favorable locations some may have lived for a millennia or more.

On the way up Mount Donna Buang, near Warburton which is a pleasant day drive North East of Melbourne.  There is an aerial board walk off the mountain side which travels through a remnant of gradually maturing Nothofagus cunninghamii (Myrtle Beech) Doryphora sassafras (Sassafras) forest.  This portion of forest has escaped fire for a long time, so long the few remaining Eucalyptus (E regnans?) are dying out, which I believe takes anywhere from 300 to 500 years. 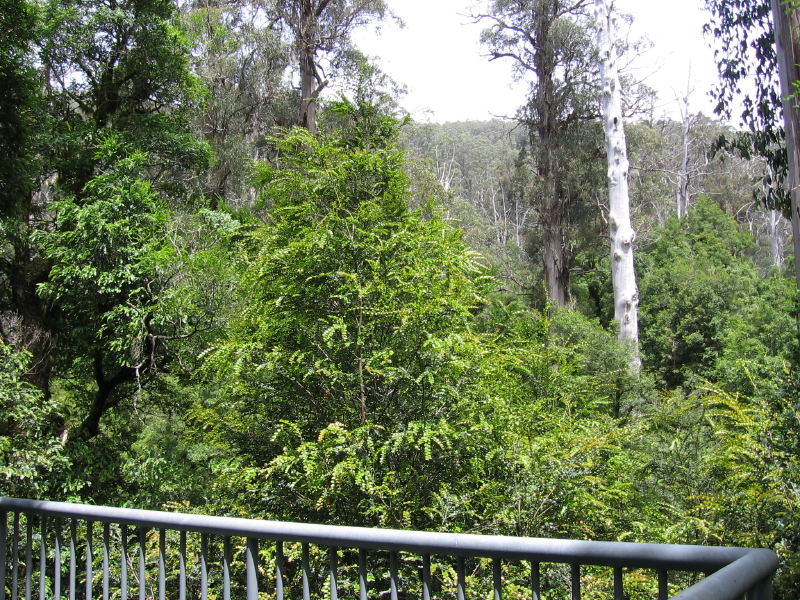 
The board walk is quite some way up, the photo below was taken to the left looking down off the railing in photo at left.


Looking down on a pretty clump of  tree ferns, Dicksonia antarctica. 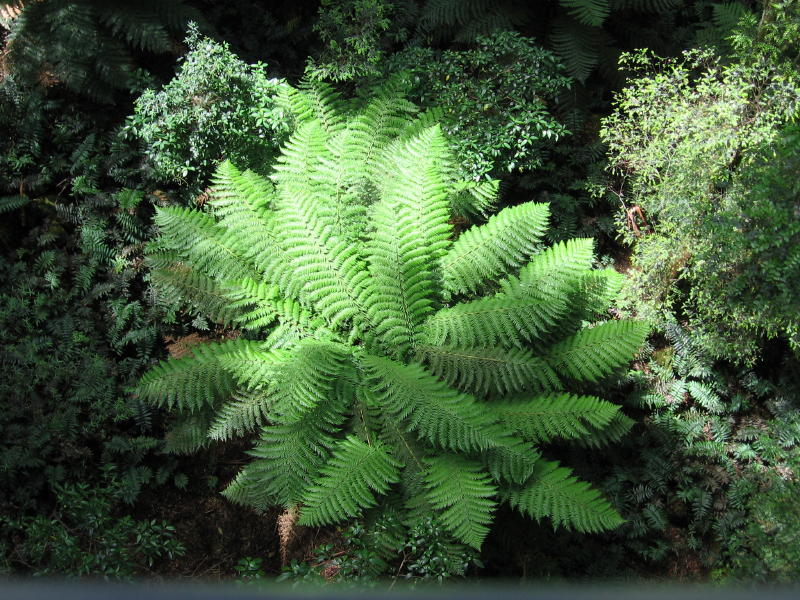 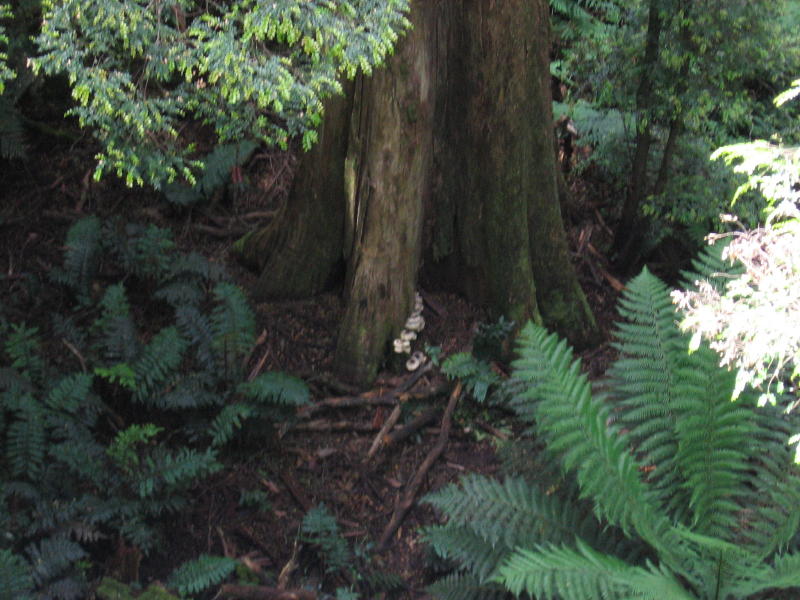 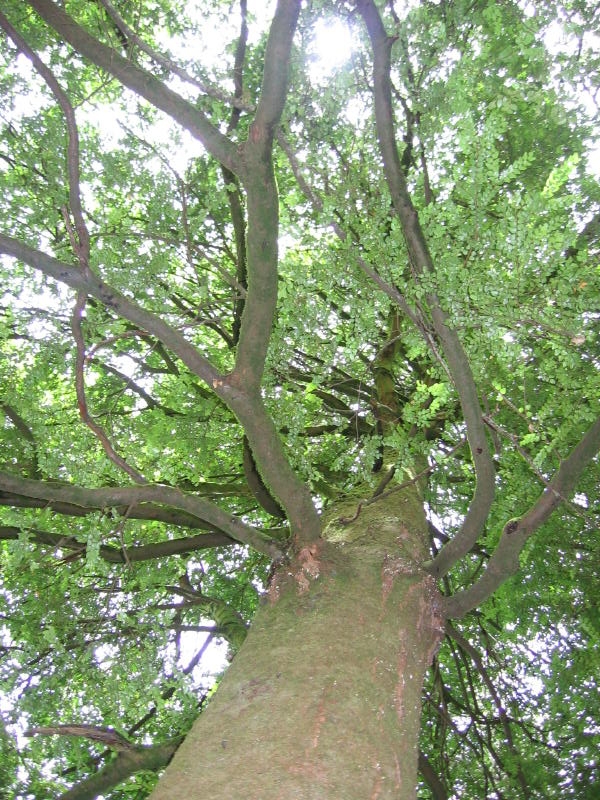 A nice buttress on Nothofagus cunninghamii, the foliage
is from another smaller Myrtle Beech.

The photo to right was taken from a similar altitude above ground, they are quite tall inside the forest. As you would expect in damp location there are also epiphytes in abundance though the cool temperate climate generally only selects for ferns and mosses.

A short distance further up the mountain you come to a car park where you will see regrowth from the Black Friday fires of 1939 (?).  Most of the middle storey is Myrtle Beech, behind the fence the understorey is Dicksonia antarctica.  The waist high Cyclone wire fence gives some idea of scale and the relative rates of growth, the fire was hot enough to kill all trees.  Eucalyptus regnans grow much faster than Myrtle Beech. 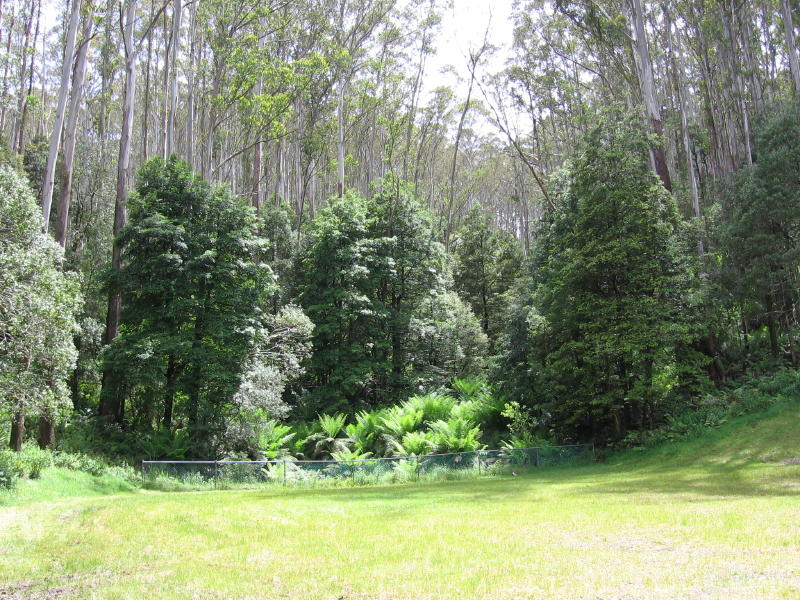 I didn't actually look for Sassafras in this spot and I didn't take any photos of the quite large trees I saw earlier, maybe one day I'll go back there.


Most of the Eucalyptus we have in our valley are lucky to be older than 80 years, most wind up at the saw mill well before that.  In the damper areas they are in fact only interlopers appearing in disturbed areas, most local people think of Wattles in the same way, the Wattles often only live for 10 to 20 years. It's all a matter of  time scale.  But this is just my opinion, maybe Tallowood, Flooded Gum and Blue Gum live longer than I think, but then again I don't recall reading about them as a rainforest alliance or sub alliance member. 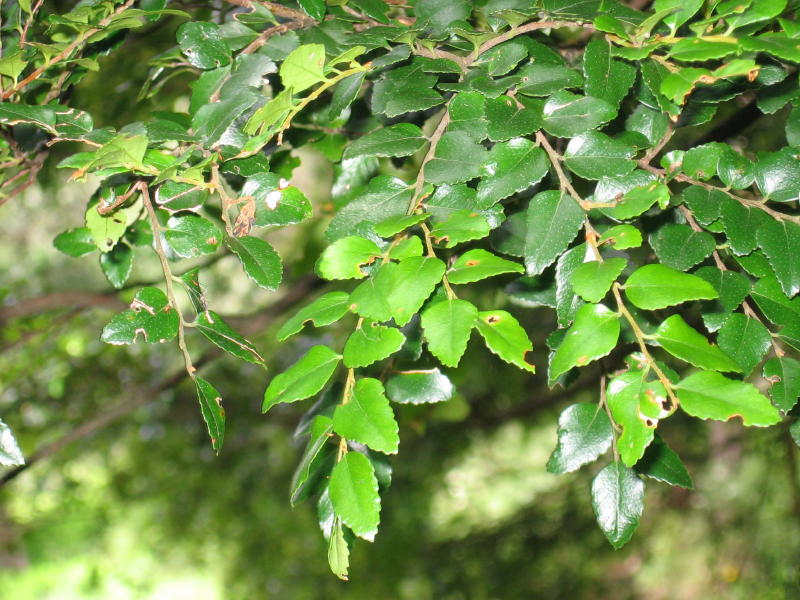 A pretty little leaf with
lots of very obvious oil dots,
the stem (petiole) raises the leaf above the branchlet.


This species is not local to Mooral Creek so it won't be in my plant list but hey, this photo might help someone.

One of the things I want to achieve is to create a resource to help people identify rainforest plants, not intended as a botanical key or botanically precise, there are plenty of better and professional resources for that.  I'm just pointing out features I haven't seen highlighted except in text or perhaps photographed in a different perspective that stand out to me.