Not yet.  If you see seedlings arising from a gelatinous mass it could be one of these.  Look up at the foliage way above you, seeds are wind borne, helicoptering down they usually don't travell too far. 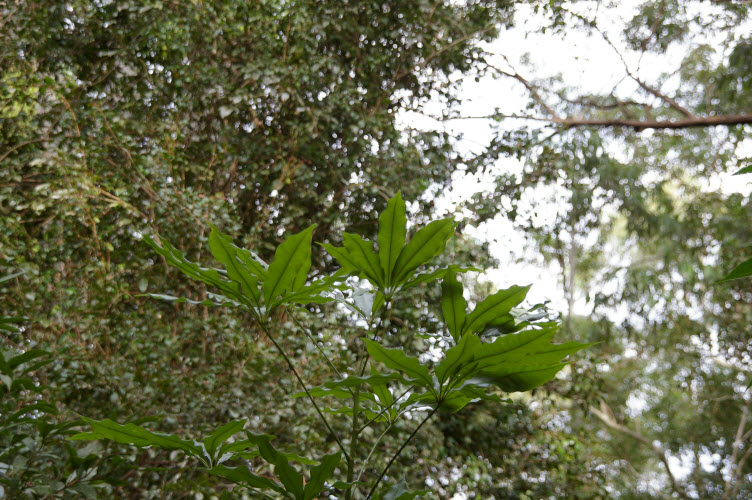 This particular specimen was bought from a local rainforest specialist nursery, before I knew I had any local specimens.  This is also one of the plants that made me think I should start protecting plants against Wallabies with cages. It also demonstrated the necessity of raising the cages up off the ground as they grow, this one was caged till it was about 2 metres tall.  It was about 3 metres tall when the photo was taken.

In the background is a mixture of Maclura cochinchinensis, on the left, then Acmena smithii, Eucalpytus saligna and a horizontal branch of Eucalyptus microcorys. 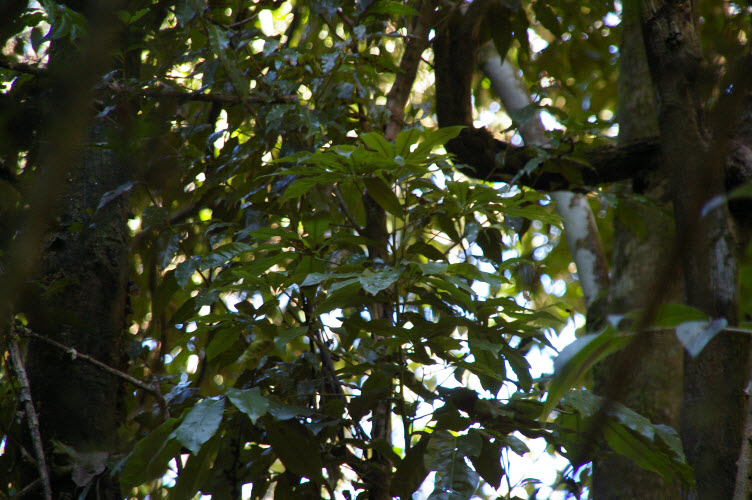 This Black Booyong had been trying to get through a Large Leaf Privett and a Waterhousea floribunda for quite some years.  When I first saw it the trunk was quite thin, perhaps 2 metres tall with just a topping of 2 or 3 leaves, this was one of those times when you see something out of the corner of your eye, "that's not quite the same as everything else".

I killed off the Privett but still there was not much growth.  Then one year we a big storm come through that twisted off and toppled many of the large Blackwoods (Acacia melanoxylon) in this gully.  The Blackwood on the North side, shading the bottom of the Waterhousia also had a large Cockspur Thorn in it, the shade was dense.  Toppling the Blackwood also snapped the Cockspur, what you see below is the result, the Black Booyong will now grow, for a very long time.
The image above does not really show you how you might recognise a Black Booyong from below, as you would under a tree.  Hence the photo below, the palmate leaves

are quite obvious.  Also, on the left is a dead Large Leaf Privett, still hanging around, I'm surprised it hasn't collapsed years ago, maybe it is the protection of the other trees.  To the right of the palmate  Heritiera actinophylla leaves is a well chewed out Waterhousea floribunda branch, most likely the work of Yellow Tailed Black Cockatoos in search of grubs, that branch is probably dead, no white bark visible on this side at least and it's generally darker than the live branch to the right.

Despite the massive damage this time, the Cockatoos definately give the trees good service, otherwise the grubs would overwhelm the trees, of many different species.  We have a flock of about 18 to 20 that come either enmasse or just as a family group, usually 3, only one young.  The flock has gradually increased from, as I recall, about 12, over the past few years.  They visit most weeks, at times they seem to hang in the sky, like "yeah, lets flap a bit and see if I go somewhere". We call them the Squeaky Doors, that's what their calls are like sometimes when they are in flight, quite loud because they rarely fly very high near the house, maybe 10 metres above the house, sometimes they loop a lot lower.

What I have figured out about trying to encourage Black Booyongs to grow are 2 things.

1. They need quite a bit of light to encourge rampant growth, they are also quite frost hardy, however they do not like full sun, they burn and shoots die, they would like some protection from mid day summer sun, dappled over head shade is fine, through Gum or Wattle is perfect if that's all there is.
2. They love good food, the Gondwanans are from a time when our soils were younger, not as leached.

Without both conditions don't expect much growth.  The same could be said for Sloanea woolsii in my experience, frost hardy, needs lots of light and it responds to a feed, oh, and both are execellent Wallaby fodder when less than a metre tall, after that they must be less tasty, they are certainly still within reach.

That said, this location is about 15 minutes scramble further beyond where I have ever fed anything.  The soil here is a red volcanic soil, grows most things well so long as they like it wet, this is down the bottom of a large North South gully, the category 1 stream flows most of the year.  Before I found this Black Booyong and another up the other end of Sassafras, it was another species on my Missing or Not yet found list.  I bought some from Dingo Creek Rainforest Nursery, they are over in the next Valley system West of us, not too bad Provenance wise, the source plants were local to them.  The bought plants are somewhat closer to the house and get fed.


You might have to wait a while.  Most places with rainforest have them.  The first time I saw them was at Dingo Tops Forest Reserve on the short walk through the forest at the picnic ground.  You do need to scout around for the entrance to the walk, there is a sign but it is kind of dwarfed by the trees behind it, so is the start of the walking track.  The easiest Black Booyong to see are near the start of the walk on your left.