We do both regeneration and propagation.  We definitely do more regeneration work than propagation.  We very rarely buy in plants.  Be a little bit careful if you do, both of the 2 species I've bought in I found afterwards, being Red Cedar and Black Booyong.  The Red Cedar were from further up Mooral Creek, a known local provenance and then I went and found a self sown seedling from somewhere local.

Our policy is if it's already here encourage it, unless it's privet, tobacco or lantana, or one of the other introduced weeds.

Fortunately we have a reasonably wide variety of plants already here.  Total number of identified local plant species is over 180.  There are still a number of unidentified species of all sizes.

The basic issue is the quantity and the age.  The quantity we try to help by helping those seedlings that are sprouting survive and those we cannot see many of we will propagate.  Only time will fix the age problem.

Our primary weed species is the small leaf privet, followed by the large leaf privet and in the occasional frost free area, lantana.

We never spray, burn or bulldoze weeds, you would be amazed at what you will find underneath.  As an example, inside  privet, depending on where on Sassafras we are, some of the seedlings I have identified that we will regularly  find (as distinct from just occaisionally), are;

It is much much easier to encourage what is already there than start from scratch, then all you might want to do is a bit of redistribution, which I've done with Native Daphne (Hymenosporum flavum) which is extremely common in places or replanting amongst what you already have, I started with White Beech (Gmelina leichhardtii), and then I did some Port Jackson Fig (Ficus rubiginosa) and Moreton Bay Fig (Ficus macrophylla).  The White Beech came from further up the valley, the Port jackson figs came from across the other side of the valley, the Moreton Bay Figs came from Wingham.  The parents in all cases were very mature specimens.  The figs came from perhaps 10 fruits in total each, hundreds of seedlings! My next propagation efforts will be Sassafras and possibly Coachwood, though the latter may be appearing with reasonable regularity, I haven't identified the seedlings appearing with any certainty yet, perhaps I'll be more certain by next summer.

Many species don't occur where our privet infestations are, or only reappear after the privet is gone, or maybe only inside privet regrowth, they just needed that extra little bit of light to get started.  Generally anything that is not privet is most probably what you want to keep. Being especially careful around Guioa semiglauca, a seedling Guioa looks just like a seedling privet to the unwary. 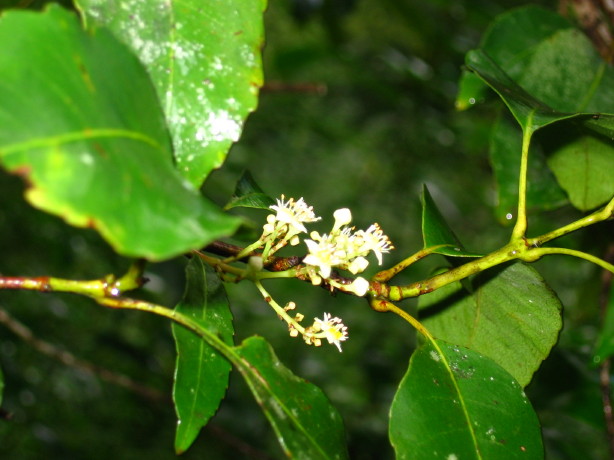 It also does not include those inside privet we find well beyond the seedling stage, eg Muellers Walnut (Endiandra muelleri) or, on the left, White Birch (Schizomeria ovata), I haven't identified either species as seedlings yet.

In most instances those that are under the privet may have only advanced to their seedling leaves or may only have 6 or so leaves on a long thin scraggly trunk.


The 2 Yellow Ash (Emmenosperma alphitonioides) I've found inside privet were like that.  Scraggy stems, perhaps the thickness of a pencil, zig zagging up, each bend seems to represent a growth flush.
One of them I would estimate was perhaps 10 years old, very gnarled and knotted, about 1/2 a metre tall with maybe 6 leaves. 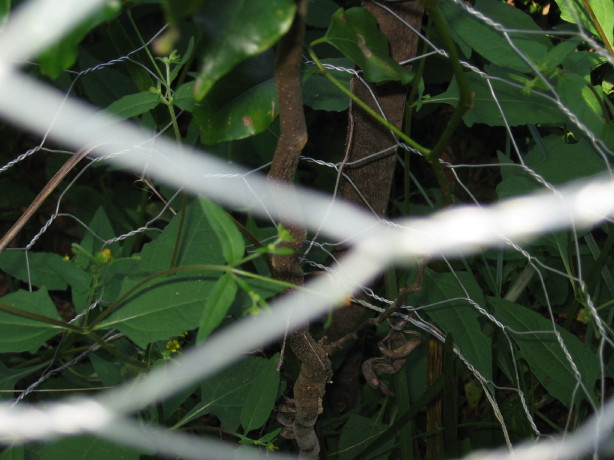 The knots have disappeared now, in this photo they only show up as wobbles in the stem, it has plenty of leaves and is now a little over 3 metres tall, another one on better soil got to about 3 or 4 metres tall before being massacred by stem boring grubs, then it grew back again, about 5 metres tall now.

The bizarre thing about Emmenosperma alphitonioides occurrence here is that I know of 4 young trees over a couple of hundred metres or so, as the Pidgeon flies, thats a straight line.  That's what I suspect happened, plop plop plop, one after the after by one bird after feasting on another one somewhere else.


Without cages many species including Yellow Ash don't stand much of a chance with the Swamp Wallabies.  This is the flush of growth after the wallabies munched the top off before I moved the cage up again.  I didn't hammer the stake in well enough this time and they had another go, pushing the cage over. 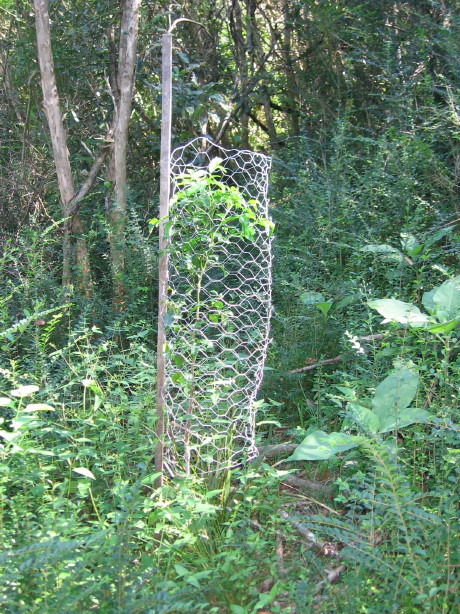 Cages start out life 900mm tall, made from 1 metre of chicken wire, this one is stretched a bit. They get reused until they get totally destroyed, so far that has happened only by mowing over, not around here of course but in the garden.

After 5 or 6 years or so in very damp spots the bottom row of wire can get a bit rusty, usually only if it is below the mulch, that still leaves 850mm of useful cage. 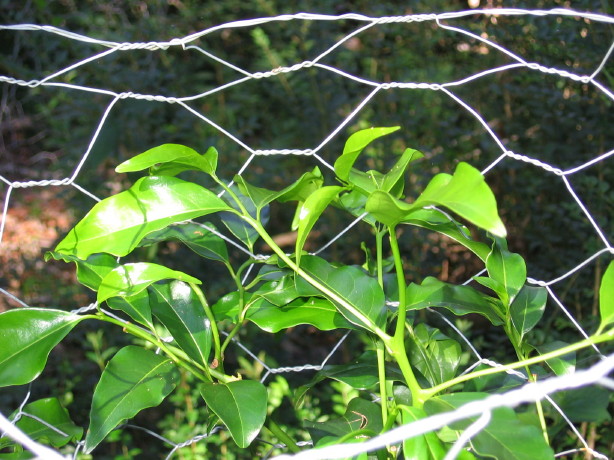