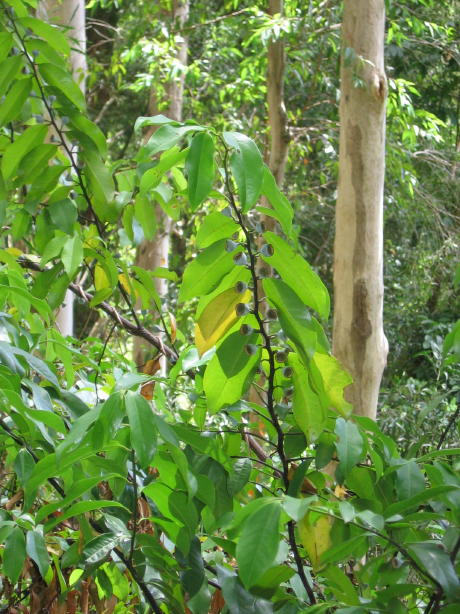 Some years Bolwarra can fruit heavily.  They seem to appear in most vegetation types, in very damp places and dryer, though they seem to be more common in the dryer locales, perhaps because there is usually more light.

This one is next to a Grey Gum and a Tallowwood, (they seem to be popular with the locals) they are on the edge of a very wide bench (or a flat hole on the hill side) quite some way up on a gully hill side where there almost certainly used to a very big tree some years ago.

On that bench growing away now after I removed the Privett and Lantana, are various Cryptocarya, a couple of Gmelina leichhardtii, some Melicope micrococca and a few Rhodamnia rubescens and from memory I think there is a Daphnandra micrantha, if not there is one maybe 5 metres up hill from the edge of the hole on the hill side.  Then there are the various ferns.  Also, the Grey Gum is quite popular with some of our animal inhabitants, they could be marsupials, or maybe reptiles, most probably both.

The branches of Eupomatia laurina have a noticeable zig zag to them, very pronounced where there are fruit.

The 3 smaller trunks in the back ground belong to young Grey Gums, Eucalyptus propinqua X biturbinata, the larger one on the left is most likely a Sydney Blue Gum, Eucalyptus saligna.

Common names are strange beast, we are about 3 hours drive from the Northern edge of Sydney, as in Sydney Blue Gum.

The Moreton Bay Fig is another good example of a geographically challenged common name, it occurs from the Shoalhaven River, say Nowra, on the South coast of New South Wales, all the way up the Eastern Australian coast to 120 km South of Gladstone.  As the crow flies that is about 1,250 km, but the mountain and coastal regions the Fig occurs in don't occur in much of that straight line.  If I were to drive by the main coastal road between those 2 towns I would cover about 1500 km to just short of Gladstone where that fig stops.  Moreton Bay is near Brisbane, about 2/3 of the way up in the range of the Moreton Bay Fig. 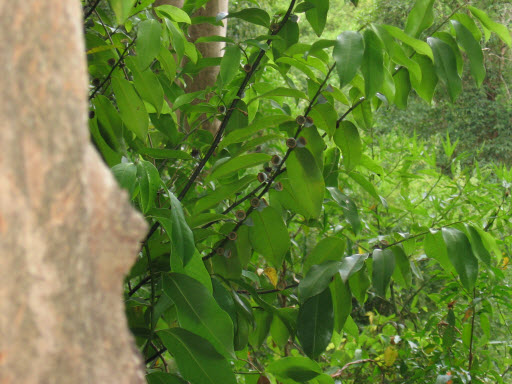